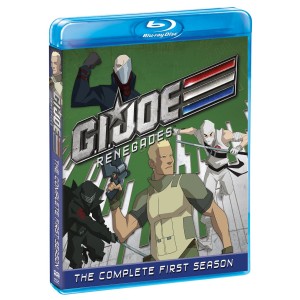 The Hub’s very own G.I. Joe Renegades comes to Blu-ray September 26th. Catch all 26 episodes on a three disc set from SHOUT! Factory.

Basically this show was similar to The A-Team with a classic G.I. Joe character scavenger hunt thrown in. Later episodes start to feature a classic character of the week.  It was a lot of fun to watch! Fans of Snake Eyes would certainly enjoy!

From Hasbro.com
“This action-packed animated series goes back to basics with the origins of G.I. JOE, the world’s most elite fighting force, and their evil nemesis, the Cobra organization. Witness the emergence of the heroic G.I. JOE team as a cadre of highly-trained specialists who are forced to band together to prevent the nefarious forces of COBRA from achieving global domination. Produced by Hasbro Studios.”