We here at FCAJP.com like to think that we run a pretty tight ship where we can. Given the chance, our Death Star probably wouldn’t include an exhaust port that would render the entire thing space dust with a single proton torpedo. So, we were a little surprised when the Walt Disney Company, in its most blatant bid for an Oscar this year, seemingly so carelessly approached the details of a film that’s so much a part of its own iconography.

We realize we are late to the table with our thoughts on this one, but hey, life gets in the way sometimes. The film itself is exceptional, full of stellar performances in even what might have been throwaway supporting roles if handled by another studio. Walt Disney’s daughters begged their father for years to make a film based on the stories of Mary Poppins, but it turned out to be a much bigger task than he bargained for, surprising for a man of his stature. That’s because dealing with the author of these loosely connected tales, P.L. Travers, was an exercise in humility for many on the Disney staff, and for Walt, after nearly twenty years of trying, almost one of futility. 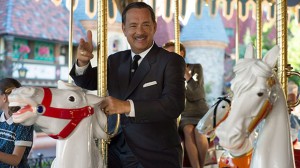 Tom Hanks gives an exceptional performance as Walt & Emma Thompson was shockingly ignored for her role as Travers.  Paul Giamatti & Colin Farrell shine in supporting roles as a chauffeur & Travers’ alcoholic father, respectively.  And of course, this being Disney, you get the sanitized & sweet version of history.  As difficult as Travers seems to deal with in the film, all evidence suggests that in reality, that dial would be cranked up to 11.

But what was really startling given the obvious fact that the built-in audience for the film would be the Disney obsessed was the number of glaring errors in the Disney timeline.  For example:

1) When Walt Disney walks Mrs. Travers down Disneyland’s Main Street USA, the marquee for Great Moments with Mr. Lincoln can be glimpsed in the background. That attraction was not added to Disneyland until after its debut at the New York World’s Fair – after the premiere of Mary Poppins.
2) While the production team did make some effort to make Disneyland appear as if the characters were walking in Walt’s footsteps, they did not hide the fact that Fantasyland had gone through a complete revamp in the early 1980s. Pinocchio’s Daring Journey, for example, seen onscreen, didn’t open until 1983.
3) When Mrs. Travers arrives in her hotel room, which is lavished with gifts of Disney merchandise, there is a Winnie the Pooh doll among the gifts, before the Winnie the Pooh shorts had been produced & merchandise was available.
4) When Mrs. Travers first arrives at Disneyland, you can glimpse computer terminals at the main gate, a few decades ahead of their actual debut.
5) When Mrs. Travers is watching Walt on her hotel room television, she turns it on with a remote control immediately.  While it’s not quite a Disney glitch, we’re not so sure that technology existed at the time…
What other errors have we missed?  Did you catch anything?

Saving Mr. Banks hits Blu Ray/DVD on March 18th.  If you haven’t seen it yet, I wouldn’t let the above bit of nitpicking get in the way of checking it out.  It’s just a headscratcher.

This entry was posted in Blu-ray, Movies. Bookmark the permalink.