Posted on September 16, 2013 by Charles Jeffreys 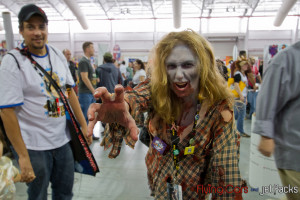 The course is open Sat., Oct.12 from 6:45 pm – Midnight. Survivors climb, crawl and slide in an effort to avoid confrontation by hordes of Walkers, while achieving the ultimate adventure on The Walking Dead-themed obstacle course. The Walking Dead Escape is not a race and Survivors are not timed, but the end is near and they must move swiftly. If they’re lucky, Survivors will reach the decontamination zone where their level of infection – if any – will be determined by a confidential military scan. Walkers will be transformed into the undead by professional makeup teams and released on the course to haunt the living.

To participate go to www.thewalkingdeadescape.com and register.

This year The Walking Dead Escape is elevated with new props, scenes and full The Walking Dead experiences. Fans can participate in this epic adventure; as a “Survivor” racing through the zombie-infested evacuation zone with familiar scenes and props from the show and comic book series; or as a “Walker” in the undead horde.

This entry was posted in Comics, Conventions, News, Television, The Walking Dead. Bookmark the permalink.