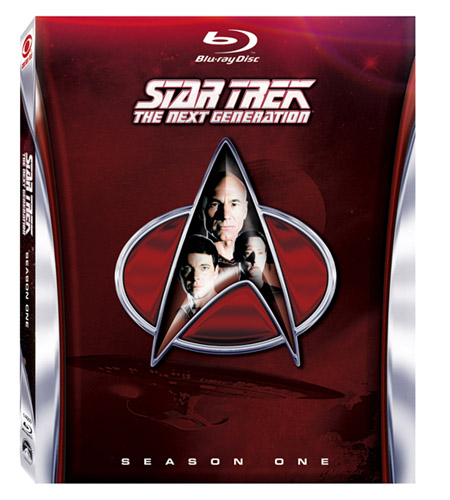 A number of cable channels re-air the show, the BBC broadcasts repeats in some sort of bizarre cropped aspect ratio.  Syfy lets viewers enjoy it full frame, however you will instantly notice that despite being broadcast in HD on HD channels, something is still terribly wrong with the image. There is a fuzzy softness that you can’t seem to escape.  From the promotional materials for the release of the upcoming Blu-ray the image looks amazing! Clear and crisp or in the words of the press release,  a “New High-Definition Transfer with staggering Before/After results.”

The First Season Blu-ray set will be available July 24th for a suggested price of $118.00 U.S. and will be in 1080p. Some of the special features include episode promos, a gag reel, and Stardate Revisited: The Origin of Star Trek: The Next Generation (HD).

Fathom Events is having a one night event to support the release of the Blu-ray in select movie theaters on July 23rd at 7:00 PM (local time). Click the link for tickets.

Check out the full Press Release for the Blu-Ray set and the release for the Fathom Events Star Trek: The Next Generation 25th Anniversary Event.

HOLLYWOOD, Calif. (April 30, 2012) – The enduringly popular sci-fi favorite STAR TREK: THE NEXT GENERATION – THE FIRST SEASON makes its Blu-ray debut on July 24 from CBS Home Entertainment and Paramount Home Media Distribution.  Celebrating its 25th anniversary in 2012, the beloved series continues to enthrall fans with its exciting and socially relevant tales of space exploration in the 24th century.

STAR TREK: THE NEXT GENERATION – THE FIRST SEASON has been retransferred from original film elements to produce stunning high-definition images, including amazing visual effects that have been painstakingly recreated from the source material, creating before/after results that fans will love.  The six-disc Blu-ray set also features 7.1 DTS-HD Master Audio and a wealth of exclusive bonus material, such as archival footage, a gag reel, and an inside look at taking The Next Generation to the next level of high-definition.  Featuring numerous behind-the-scenes interviews, the new material also features Star Trek experts Mike and Denise Okuda, consultants throughout this ongoing project, who offer special insights into the countless man-hours dedicated to the upgrade of The Next Generation.

The STAR TREK: THE NEXT GENERATION – THE FIRST SEASON Blu-ray set will be available in 1080p with English 7.1 DTS-HD Master Audio, English Stereo Surround, French Mono, Japanese Mono and German Mono (with the exception of “Encounter at Farpoint” which is in German Stereo).  The discs also include English SDH, French, German, Castilian, Italian, Japanese, Danish, Dutch, Finnish, Norwegian and Swedish subtitles. The Blu-ray is not rated in the U.S. and rated PG in Canada, and it will be available for the suggested retail price of  $118.00 U.S. and $136.00 Canada.  The disc breakdown is as follows:

Encounter at Farpoint
The Naked Now
Code of Honor

Hide and Q
Haven
The Big Goodbye
Datalore
Angel One

CBS Home Entertainment manages the worldwide DVD and Blu-ray businesses for the CBS Corporation across all lines of content including current hits and classic series from the vast CBS library, as well as new releases from Showtime Video.  CBS Home Entertainment products are released on the CBS DVD and CBS Blu-ray labels.

NCM Fathom and CBS TV are coming together to present a special one night event to celebrate the 25th Anniversary of Star Trek: The Next Generation.
Star Trek: The Next Generation 25th Anniversary Event
In Select Movie Theaters Nationwide
Monday, July 23rd at 7:00 PM (local time)
Only One Night!
This summer “boldly go where no one has gone before” and don’t miss the only opportunity to see two of the most popular Next Generation episodes, Ep. 106 “Where No One Has Gone Before” and Ep. 114 “Datalore” on the big screen.
This special event will include exclusive looks at the massive restoration of season one, never-before-seen interviews with the original cast members and behind-the-scenes looks at the artists who created the original FX elements and photography during the making of the show. Audiences will also be privy to an unseen sneak-peak of “Measure of a Man.”
Set in the 24th century, The Next Generation was created by Gene Roddenberry over 20 years after the original Star Trek series. The Next Generation became the longest running series of the Star Trek franchise, consisting of 178 episodes over 7 seasons. Star Trek: The Next Generation 25th Anniversary Event is the first opportunity to see this transcendent digital presentation like no man before, in movie theaters, on Monday, July 23rd at 7:00 PM (local time) with additional late night showings at select movie theater locations. Check your local listings for details.
Don’t miss seeing the futuristic world created in the past.
TICKETING*
Tickets are on sale now! Enter your zip code to find your nearest participating theater and to purchase tickets today. Limited seats available – so buy your tickets early!
This entry was posted in Blu-ray, News, Star Trek, Television. Bookmark the permalink.