Pre-order of The Hunger Games Blu-ray set starts on Friday, May 25th. The set will include 2 Blu-ray discs and digital copy of the film. The standard def DVD edition will also include 2 DVD discs and a digital copy. 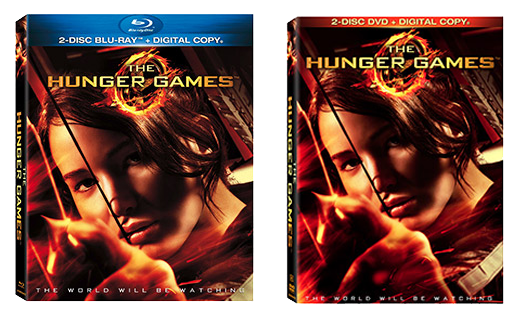 Here are both editions of Lionsgate’s The Hunger Games

There will be a midnight release of the boxed and digital version of the film at 12:01 on August 18th.

The following is from EW.com:

The two-disc set will include over three hours of unreleased material, with features that provide insight into how the film was made, interviews with the cast and crew, and details about some of the story lines that differed from the book — like President Snow’s character (Donald Sutherland) and the role of the game maker (Wes Bentley). An eight-part documentary entitled The World is Watching: Making of The Hunger Games delves into the behind-the-scenes aspect of creating the film. The extras also include the full-length “Propaganda Film” shown during the Reaping.

By releasing the Blu-Ray/DVD at midnight, Lionsgate hopes to recapture the excitement from the midnight theatrical screening back in March. “The motion picture event of the year is poised to become the home entertainment event of the year, and with a midnight launch and midnight retail events scheduled at stores around the country, we expect to replicate the same level of consumer excitement generated by the film’s theatrical debut,” said Ron Schwartz, Lionsgate Executive Vice President & General Manager, Home Entertainment.

EW.com is hosting the exclusive premiere of the Blu-ray/DVD trailer.

This entry was posted in Blu-ray, Movies, News and tagged Blu-ray, The Hunger Games. Bookmark the permalink.