Posted on September 7, 2011 by Charles Jeffreys

A new remix from DJ Steve Porter for the release of the NBC comedy Community appeared on YouTube a few days ago. The new remix utilizes scenes from the new DVD for Community: The Complete Second Season, which arrives September 6th. The video was first shown at the Community panel at this past July’s San Diego Comic-Con International shortly before the cast arrived on stage. 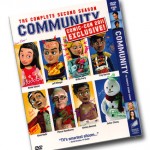 The Comic-Con Exclusive Slip Cover for the Season 2 DVD Set handed out to audience members of the Community Panel.

DJ Steve Porter was made famous on YouTube for his hilarious remix of Vince Offer’s Slap Chop commercial called “Rap Chop.” Porter also produced a previous remix last year to promote the release of the DVD for the 1st season of Community which will be included on the 2nd season’s DVD.

Check out these fun and hilarious videos!

The second season of Community comes out on DVD September 6th.

This entry was posted in Television. Bookmark the permalink.